Why didn't all of my queued contacts receive an email? What are the Active Contact limits for plan subscription tiers?

Written by Marco DiDomenico
Updated over a week ago

TL;DR - Active Contacts are calculated based on your 30 day billing cycle (or monthly anniversary for free plans based on when you first signed up for Replyify).  A contact is considered Active if, during the current 30 day cycle, they received an email (or any other kind of 'step') defined by your campaign sequence.

You can email the same contact in the same campaign as many times as you want and it will count as 1 Active Contact.

Our FREE forever account comes with 25 free active contacts per month and you can subscribe to any number of different subscription plans to increase this limit according to your needs.   We also have unlimited plans so you don't have to worry about your active contact count. To subscribe or upgrade click here. 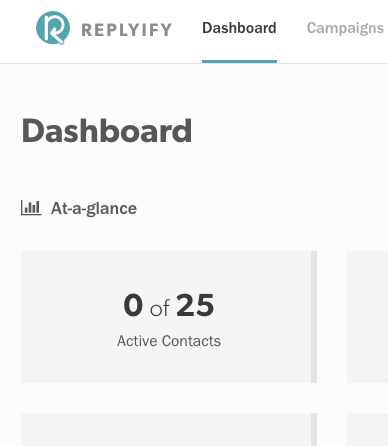 Here's How We Determine an Active or Inactive Contact:

A contact is considered active if they have been added to a campaign which has sent them the first email (or other step like Twitter, Phone, LinkedIn etc) in your campaign sequence.  Once that contact is active they are considered active for the entire billing cycle even if the sequence is shorter than 1 month.

If the campaign sequence spans longer than 1 billing cycle and the contact has NOT been converted, unsubscribed or removed, they are still considered Active during the next billing cycle until a Deactivation Event occurs (see below).

Important: Once a contact has been activated during a billing cycle, they will remain active (no matter what) until then end of that cycle.  Once the next billing cycle begins, these Active Contacts will automatically move from active to inactive immediately after a Deactivation Event.  If you think you have too many active contacts, you can run a report in the campaign contacts section applying filters 'replied = yes' and 'converted = no'.  You'll need to click into the contacts to mark them as converted or unsubscribed.  Pro tip - when you get a positive reply, mark the contact as converted from the ToDo section.

Deactivation Events Include:
Mark as converted, unsubscribed, campaign sequence completed, or you manually remove them from the campaign.

Contact is in Multiple Campaigns:
If a contact is active in one campaign and you add them to another campaign they will count as 2 Active Contacts!

Example scenario:  On September 1st, you purchased a Starter Plan, uploaded 100 contacts and set your first campaign LIVE (10 steps spread out over 45 days).

Think this is complicated?  Imaging building it :)  Unlimited Plans start at $99 and you'll never have to worry about this again.

Did this answer your question?